I am quite positive Sherlock Holmes will not be needed to figure this one out as it was not stolen, nor has it disappeared, after all, it’s a mountain; however, it has been fenced up, and will be so for some time to come, possibly a year or so, as there are many projects scheduled to enhance the Lone Mountain Experience.  So says Clark County Commissioner Larry Brown according to 8 News Now Video. 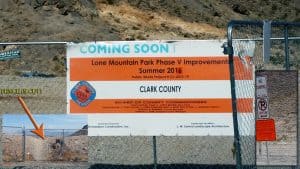 This has caught many residents in Las Vegas to include myself off guard as Lone Mountain is a very popular hiking area. I have visited the location personally to verify and have found that the mountain is at least partially fenced; however, there are areas where residents have cut down or removed fencing to gain access. I noticed a few NO TRESPASSING signs posted; however, have witnessed several people marching up the mountain. Research before you go as you very well could be trespassing. Lone Mountain is located in the North West part of town at Lone Mountain Road and the 215 Beltway.  You cannot miss this mountain as it stands, like its name alludes:  all alone. Every day of the week it is normal to see people scaling its paths to the top or for some the bench mounted mid way.  It is a medium to moderate hike; however, my six and seven year old boys have named it, and I write this laughing, the “ROSSMAN” mountain after tackling it a few times. I would have to say, second to a seat in one of ourHELICOPTERS, it has one of the best views of our Valley. Additionally there are plenty of park and recreation stations at the base of the mountain to enjoy including; but, not limited to BBQ, Pick nick Tables with shelter, basketball, tennis, soccer, playgrounds and much more.

When the mountain is given back to us, be prepared and take plenty of water for yourselves and your pets.  It can be HOT up there in the summer,  perhaps next summer that is!